To celebrate the launch of Thom Browne’s tartan-heavy Fall 2022 preview launched during New York Fashion Week, we paired the actor Chase Sui Wonders of HBO’s Generation and the forthcoming A24 slasher Bodies, Bodies, Bodies with the Euphoria heart throb Angus Cloud to talk skateboarding, scary movies, and the pitfalls of becoming a celebrity.

ANGUS CLOUD: You too. How you doing?

SUI WONDERS: Not bad. I’m in New York. I just moved into a new apartment so I’m getting everything situated. Are you going to be in NY on Thursday for the Thom Browne dinner?

SUI WONDERS: I cannot wait. So we’re supposed to ask each other all these questions.

SUI WONDERS: Thank you for your question, Angus. I was deathly shy. I was a mute as a kid, and so my mom was really frustrated with me. She sent me into all these community theaters so she could pry some words out of me. That’s how it all began. Can you talk about your acting origin story?

CLOUD: I got hit by a meteor. I got blessed with the superpower of being lucky. Then some lady said go on TV. That’s how it all started.

SUI WONDERS: As a kid, did you ever see people on TV and be like, “I could do that”?

CLOUD: Not really. Did you?

SUI WONDERS: As a kid I’d have dreams about being in movies. I didn’t talk much, but I was obsessed with Austin Powers and Mr. Bean. That’s how it came alive. I quoted Fat Bastard and did a Mr. Bean impersonation.

CLOUD: I fuck with Mr. Bean. When did you first feel like acting was your real job?

SUI WONDERS: Since I started acting, not a single day has felt like a job, which is good.

CLOUD: It’s the best job ever. You staying busy?

SUI WONDERS: Yeah, I just did a horror movie Bodies Bodies Bodies, with this ridiculous cast in Upstate New York. It’s an A24 movie, which I’m excited about. We’re going to South By Southwest next month.

CLOUD: I was just in Oklahoma for a month with a bunch of dudes doing a frat movie.

CLOUD: Yeah, we was all stuck in the hotel for like a month.

SUI WONDERS: Did you go to college at all?

CLOUD: Nah, I used to sneak into the parties way back when I was in high school, but I ain’t go to college.

SUI WONDERS: Which college did you sneak into? What’s near Oakland?

CLOUD: UC Berkeley. I’m glad I ain’t go to college, though. I probably woulda wasted my time. You went to school?

SUI WONDERS: I did, I went to school and I studied film. I feel like I kind of squandered the education aspect of it, which I kind of regret. But I watched a lot of cool movies and spent most of my time in a movie theater. What is the biggest mindfuck of this gig?

CLOUD: People knowing me and recognizing who I am. That shit fucks with my mind for sure.

CLOUD: I’d rather people didn’t recognize me. I’m not mad at them because they do, but I’d rather they didn’t. I just want to have regular interactions with people. I don’t want to be treated special.

SUI WONDERS: That part can be pretty disorienting.

CLOUD: What about you?

SUI WONDERS: I grew up consuming so many movies and being obsessed with all these directors and stuff. It’s like meeting your heroes every day. That part is almost too close to dreams.

CLOUD: When you already know someone, or if you’re a fan of someone, you can’t have the same wholesome interaction with them. I prefer to meet somebody who was famous and not know who the fuck they were, and just have a regular interaction with them and then maybe I’ll figure out, “Oh man, they’re in a movie? That’s cool.”

SUI WONDERS: How do you prepare for parts?

CLOUD: I just try to remember the lines and try to be present and fresh. I don’t try to do too much work beforehand, because I get stressed out enough. It doesn’t always help in the end.

SUI WONDERS: Totally. I feel like the biggest pitfall is as soon as you get in your head.

CLOUD: You do a lot of preparation for roles?

SUI WONDERS: It feels like there is a beta stage of my brain that’s constantly thinking about a certain character. Sometimes things in my life start to mimic the character I’m about to do. But, no. I don’t really have a process that I stick to. What kind of person were you in high school?

CLOUD: I was a goofball. I was kind of a class clown.

CLOUD: Nah, I used to ride a skateboard every day.

SUI WONDERS: I skate as well.

CLOUD: Hell yeah. That’s what’s up. Back when I skated, it was like a unicorn to see a girl skateboarding, but I’m really glad to see that girls are picking it up because I was always like, “Why don’t girls skate? Is it they chest that fucks up the aerodynamics or something?”

SUI WONDERS: We’ve got boobs to break our falls.

CLOUD: Nah, we used to hate on rollerbladers. That’s kind of changed a little bit, too.

SUI WONDERS: Have you ever skated at Tompkins [Square Park] in New York?

SUI WONDERS: I really used to like to go on my rollerblades and get in everybody’s way. All of the Supreme kids and skaters were giving me the dirtiest looks as I went off their little ramp in my roller blades.

CLOUD: Why do you do them like that? I don’t even know if I can ride rollerblades or ice skates or anything.

SUI WONDERS: Can you talk about being part of a young ensemble? What are your off-camera relationships like with your castmates?

CLOUD: We’re all homies for the most part. I got mad love for everybody over there, you feel me? It’s a family business.

SUI WONDERS: Are most of your friends actors or do you have a squad of people from before you started working?

CLOUD: Most of the people I kick it with in L.A. are my homies from Oakland. I stick with my day-ones for real.

SUI WONDERS: Heavy retweet. All my closest friends are either from home or my family.

CLOUD: That’s the real ones, man. I can’t handle the fakes.

SUI WONDERS: Do you have a dream role that you would want to play one day?

CLOUD: I want to see the live action Treasure Planet.

SUI WONDERS: Are they making that?

CLOUD: Nah, but they should. That’s my dream role.

SUI WONDERS: What are your other favorite movies?

SUI WONDERS: There’s this movie The Celebration by Thomas Vinterberg that’s part of his Dogme 95 film movement where everything is shot on a shaky cam. It’s about this chaotic family gathering where everything goes horribly wrong.

CLOUD: I don’t like scary movies that much. I can’t do that fucking exorcism shit. That shit creeps me out.

SUI WONDERS: Would you do a horror movie if you got cast in one?

SUI WONDERS: I used to be terrified. When A Stranger Calls was one of the first scary movies I ever saw in theaters and I didn’t sleep for 10 days straight. I was so terrified.

CLOUD: Mine was The Ring where they had the VCR tape where if you watch it or if you got the phone call you’d die in like 10 days or some shit like that.

CLOUD: I yell at the screen. I’m one of them motherfuckers.

CLOUD: No, I’m like, “Run, bitch, run!” When they do the pop scares, I’ll be like, “Oh, shit!” People move away from me in the movie theaters. I’m sorry, I’m just fully enjoying the experience.

SUI WONDERS: I love that. That’s why we go to the movies. Go home and watch this alone by yourself if you don’t want me screaming.

CLOUD: Hell yeah. That’s why I always wanted to go to one of those superhero movies on opening day cuz everybody be in there just lit.

SUI WONDERS: One more question: What TV shows did you grow up on?

CLOUD: I do love cartoons. How’d you know that?

SUI WONDERS: Because all your references are cartoons—likeTreasure Island.

SUI WONDERS: Ok have a safe flight Angus, I’ll see you on Monday.

CLOUD: No doubt. Much love. 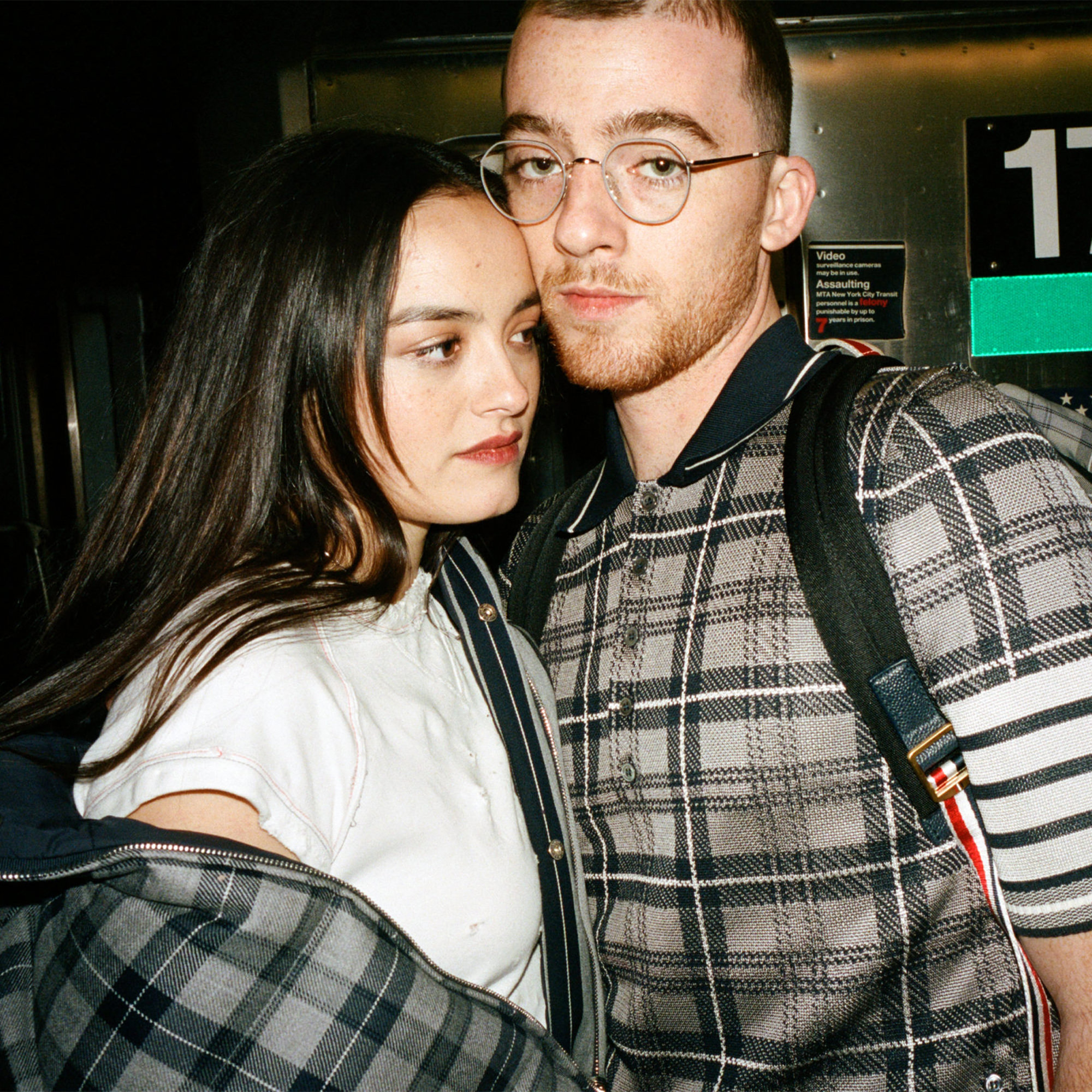